“We are stardust, we are golden, we are billion year old carbon“,

Panspermia (from Greek πᾶν (pan), meaning “all”, and σπέρμα (sperma), meaning “seed”) is the hypothesis that life exists throughout the Universe, distributed by meteoroids, asteroids, short period and long period comets.

Sir Fred Hoyle (1915–2001) and Chandra Wickramasinghe (born 1939) were influential proponents of panspermia. In 1974 they proposed the hypothesis that some dust in interstellar space was largely organic (containing carbon), which Wickramasinghe later proved to be correct. Hoyle and Wickramasinghe further contended that life forms continue to enter the Earth’s atmosphere, and may be responsible for epidemic outbreaks, new diseases, and the genetic novelty necessary for macroevolution. This model of Panspermia was rejected by their academic colleagues, and it became impossible to fund research which in any way explored the possibility that their hypothesis might be true.

In connecting epidemics to “Viruses from Space”, and in challenging the scientific establishment with this theory, Fred Hoyle offended his peers. Some believe this was the reason he failed to win the Nobel Prize for Physics in 1983. The whole theory of Panspermia became a subject of ridicule during the period 1983 – 2013. 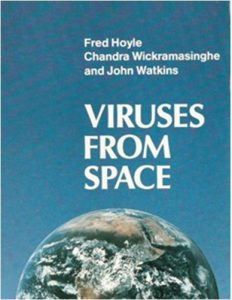 Ironically over this period man became more and more surprised at the survival of viruses and bacteria in deep ice, deep rock and extreme locations like the deep ocean vents.

On October 17, 2013, NASA reported, based on analysis of argon in the Martian atmosphere by the Mars Curiosity rover, that certain meteorites found on Earth thought to be from Mars were indeed from Mars.

Discoveries of viruses and bacteria continued in the stratosphere and,  then in 2014, in inner space outside the space station.

In 2013 the Kepler Mission exoplanet counts also affected the consciousness of mankind and especially the willingness of the world’s astrobiologists to overtly explore issues relating to extraterrestrial life.

There was a paradigm shift and suddenly “Panspermia” was mainstream science. At the 2013 SPIE conference in San Diego a paper was accepted which documented The Hoyle-Wickramasinghe Model of Panspermia, confirming this as the most likely hypothesis consistent with our overwhelming evidence that “Life is a Cosmic Phenomenon”.

In 2015 Dr. Chris McKay, Space Science Division, NASA Ames Research Center commented “…….panspermia is a hypothesis that must be considered”.

Finally scientists are free to explore Panspermia and to seek funding for such topics as “what is life?”, “are viruses alive?”, “how should missions to places like MARS, TITAN and ENCELADUS define life?” and “what are the implications if life truly is a cosmic phenomenon”.

NASA has changed the “overall tag line” of their missions from “search for water” to “seeking the signs of life”. 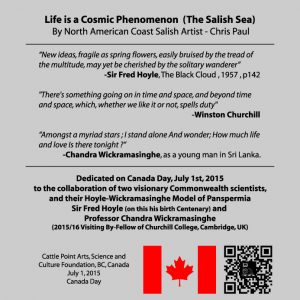 May 2015 : Having been asked to comment on Sir Fred’s Centennary, reflecting the thoughts of a new generation of NASA scientists, chief astrobiologist Dr. Chris McKay writes :

Thank you for letting me know about the 100th anniversary tribute to Sir Fred Hoyle. Hoyle was a towering figure in science and I am honoured to participate in this tribute. For an astrobiologist like me, interested in life in the Universe,  Hoyle’s work is relevant in two respects. First, and most famously, Hoyle lead the way in understanding how carbon – the essential element for life – is produced by nuclear reactions in stars. I recall the song “Woodstock” written by Joni Mitchell when I was in High School and the lines “We are stardust, we are golden, we are billion year old carbon“.

Secondly, Hoyle championed the idea, known as Panspermia, that life could transfer between planets and even between stars. As we learn more about meteorites, comets, and organics in space Hoyle’s ideas related to panspermia seem ever more relevant. We still do not know how life started on Earth, or if life is present on other worlds but panspermia is a hypothesis that must be considered.

My best wishes to all participants in the 100th anniversary tribute to a very great scientist.