July 2014 : I am sure you already know that Rosetta will be the first mission in history to rendezvous with a comet – with Comet 67P/Churyumov-Gerasimenko (67P/C-G). I risk the ire of other astronomers by referring to the COMET as COMET ROSETTA only because the latest name 67P/C-G just does not capture my imagination. I think CNN and BBC need an easier name.

In July 2014, the Rosetta Mission is already approaching the Comet as it orbits the Sun. With what promises to be a stunning implementation of ESA’s daring vision, in November 2014, the mission will actually deploy a landing vehicle onto the crusted surface of the COMET.

Last year, in 2013, the whole world watched another COMET, COMET ISON. We were spell-bound as the Comet headed in towards the SUN. Through coverage by CNN and the BBC (and eventually all the world’s media) the event attracted global attention. We all recall that ISON, in the end, failed to amaze, as it was destroyed by the gravity of the Sun on Thanksgiving evening 2013.

But this time, the almost certain landing promises to deliver wonderful TV footage that the world’s media is expected to cover for many hours if not days or weeks. Rosetta will arrive at the comet in August 2014. The Philae lander itself will be finally be deployed in November 2014.

Humans have always marvelled at landings on other bodies. First there was the wonder of landing on the MOON ; then there was the thrill of MARS CURIOSITY landing on Mars. But the concept of landing on a Comet is beyond most people’s imagination. I believe it will be breathtaking television. The movie “Gravity” educated every girl and boy on the planet about the International Space Station and the challenges of orbiting the Earth

But now childrens’ minds will be expanded as they experience landing on a body which is orbiting the Sun. I promise you the build up on TV will be amazing, as first Rosetta comes very close to the comet in just a matter of weeks. We will then share the thrill of flying alongside the comet. This will continue from August until November. And then the “reality show” culminates with this most amazing landing which I predict will happen in “prime time” in the USA.

ROSETTA’s route to the comet 67P/Churyumov-Gerasimenkohas (C-G) has been a long 10 year journey. I was fortunate to be one of the original principal investigators. But I admit to great disappointment when I realized that Rosetta was not going to carry “life detection and verification” equipment. If truth be told, in those days we did not really understand the extraordinary role of viruses in the evolution of life on Earth. Symbiogenesis has revolutionized our understanding of life and it makes me even more confident that the original theories of my now passed collaborator Sir Fred Hoyle, and myself, will eventually be confirmed. Just as 2013 was the year Panspermia became mainstream science, so 2014/2015 could well be the time that we finally discover undebateable evidence that “Life is a Cosmic Phenomenon”.

So now in 2014, as the Rosetta space craft approaches the Comet 67P/CG (Churyumov-Gerasimenko), our knowledge of viruses and bacteria and especially symbiotic life, has grown substantially. We also recognize that NASA has refocused from “the search for water” to “the difficult endeavor of searching for the signs of life”. The ESA/NASA Rosetta team are guaranteed to be employing all the very latest tools we have at our disposal using remote spectroscopy by the wonderful Chile-based ALMA telescope. Will we be able to detect life or even the signs of life?

I am pleased to share my predictions with you, and have written a short paper for your enjoyment and understanding.  The paper is adapted from a review invited by the open access journal The Journal of Astrobiology and Outreach (JAO).

May your life too be a Cosmic Phenomenon

PS Assisted by my colleagues Brig Klyce and Bill Smith, this BLOG and our associated newsletter is designed to be a convenient way for the avid science reader to keep up to date with the growing evidence that “Life is a Cosmic Phenomenon”. Panspermia has entered mainstream science. Professor Chandra Wickramasinghe.

I am delighted to launch our new quarterly email newsletter. It is aimed at the general public with an interest in science and especially in my life-time passion – everything related to the sometimes contentious concept that LIFE IS A COSMIC PHENOMENON. To do this, we’re going to look at using one of the best automation tools for SMBs to get these emails sent out to our subscribers. Last year we created a base paper summarizing the Panspemia Hypothesis in 2013.This newsletter will build upon this foundation, exploring increasing evidence for Panspermia as astrobiology starts to play a dominant role in most experiments underway and planned by NASA, the ESA, and by the Space Programs of China, India and Japan. Feedback is appreciated. Please feel free to contact me : Professor Chandra WickramasingheDirector of the Buckingham Centre for Astrobiology, University of Buckingham, Buckingham, UKhttps://profchandra.orgWe ask you to go to my website and opt-in to our subscriber database : you will see the “subscribe” menu item at https://profchandra.org/subscribe-newsletter/

May 26, 2014 :  Professor Chandra Wickramasinghe is appointed as Visiting Professor of the InRC (International Research Centre) at University of Peradeniya, SRI LANKA.

The Senate approved his appointment in its 390th meeting as InRC affiliate visiting scholar for a period of one year commencing from 01/07/2014.

I delivered a lecture entitled “New evidence for life as a cosmic phenomenon” at the Astronomical Society of Oman in Muscat on 15th January 2014, at the University of Peradeniya, Sri Lanka on 23rd January.  The audience at Peradeniya included Professor Rohana Chandrajith, Professor of Geology, who had been reported as being antagonistic to the idea that the Polonnaruwa (Aralaganwila) stones that fell on 29th December 2012 were indeed meteorites1.  In a discussion that followed the lecture Professor Chandrajith agreed that the Polonnaruwa stones in question did not resemble any that can be found anywhere locally.  He further confirmed that his earlier reservations were based on the fact that these stones were different structurally and compositionally from any of the known and documented classes of meteorites.  He alo agreed that there is no possibility that these could be fragments of industrial slag as was proposed by some critics.

The most recent studies of the Aralaganwila stones by Jamie Wallis et al2,3 that show oxygen isotope compositions inconsistent with Earth material, as well as extraordinarily high amounts of the terrestrially rare chemical element iridium strengthens the case for the Polonnaruwa stones being meteorites, and if so they contain unequivocal evidence of the existence of extraterrestrial microbial life.  This discovery would then transform the way we think about the Earth and of life upon it as radically and profoundly as did the Copernican revolution some 500 years ago.

The view that the Polonnaruwa meteorites represent fragments of loosely held siliceous grain material within a cometary bolide from which water and volatiles were boiled off upon entry, thus leaving a highly porous structure, remains the most plausible explanation of all the available facts.  A provisional identification with meteoroids in the annual Taurid meteor stream4 which we originally made is interesting particularly in view of the fact that the large bolide which led to the Tunguska event of 1908 did not lead to the recovery of any large meteorite fragments.

On 24th January 2014 I had an audience with His Excellency President Mahinda Rajapakse, President of the Democratic Republic of Sri Lanka.  I appraised the President of the latest findings regarding the Aralaganwila meteorite and urged His Excellency to declare the location of the 29th December 2012 meteorite fall as a site of national scientific heritage.  In the fullness of time the events of this day that took place in Sri Lanka would be regarded as having established beyond doubt that life is a truly cosmic phenomenon.  President Rajapakse gave assent to this proposal without reservation and immediately set in train the protocol that would ensure its implementation 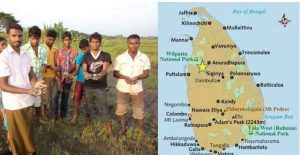