Letter to the Editor of The Times 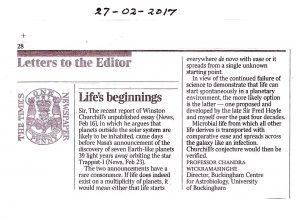 Sir, The recent report of Winston Churchill’s unpublished essay News, Feb 16. 2017), in which he argues that planets outside the solar system are likely to be inhabited, came days before Nasa’s announcement of the discovery of seven Earth-like planets
39 light years away orbiting the star Trappist-l (News, Feb 23).

The two announcements have a rare consonance. If life does indeed
exist on a multiplicity of planets, it would mean either that life starts
everywhere de novo with ease or it spreads from a single unknown
starting point. In view of the continued failure of science to demonstrate that life can start spontaneously in a planetary
environment, the more likely option is the latter — one proposed and developed by the late Sir Fred Hoyle and myself over the past four decades.

Microbial life from which all other life derives is transported with
comparative ease and spreads across the galaxy like an infection.

Churchill’s conjecture would then be verified.

The Life of Chandra Wickramasinghe : a TV Interview on TV1 – Sri Lanka’s Number One News Provider.

Towards the end of this 30 minute interview Professor Wickramasinghe comments on  Anthropogenic Global Warming theory with some  optimism that a new era of more open, critical,  scientific thinking has begun.