A sleepy little Indian town called Changa in the district of Anand in the State of Gujarat came alive from 21st-24th June with the descent of scores of astronomers and physicists from across in India and abroad.  The publication of the very first paper by Albert Einstein on the General Theory of Relativity in 1915 and the centenary of Fred Hoyle’s birth on 24 June 1915 were the dual reason for this noteworthy event.  The venue was a modern, well-appointed campus of the Charusat University of Science and Technology, located some 40 minutes drive away from a 3-star hotel in which all the participants were housed. 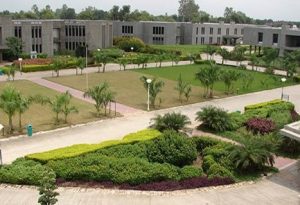 The conference was convened by Dr. J.J. Rawal under the auspices of the Indian Planetary Society and chaired by the eminent industrialist and sponsor Dr.Mohanbhal Patel.  Following the opening ceremony on 21 June, with the traditional lighting of oil lamps to signify a new awakening, the meeting was launched.

The first two days of formal sessions on 22nd and 23rd June were largely devoted to matters connected with Relativity and Cosmology.  Jayant Narlikar’s father V.V. Narlikar, who was a student at Cambridge in the 1930’s and a pupil of Sir Arthur Eddington, was the trail blazer for Relativity research in India and he had inspired two generations of young Indians to explore ideas in this field.

The distinguished cosmologist, Professor Thanu Padmanabhan, who was one time Sackler Distinguished Professor at Cambridge University and is now a Professor at the Inter-Universities Centre for Astronomy and Astrophysics at Pune India, gave a stimulating opening talk on 22 June in which he described his new ideas about the geometry of space-time and gravity being an emergent property from some deeper thermodynamic principle.  J.V. Narlikar next talked about his collaboration with Fred Hoyle on C-field (creation field) cosmology which was an attempt to formulate rigorously the Steady-State Theory of the Universe.  This was followed by other speakers who covered a variety of more conventional aspects of cosmology and general relativity.

The Fred Hoyle day on 24th June 2015 (Hoyle’s birth centenary) started with a brilliant presentation by Hoyle’s oldest living student Professor Leon Mestel (92).  Leon Mestel was unable to attend in person, but his contribution was read out by Jayant Narlikar.  Then came a talk by Peter Eggleton who had collaborated on stellar structure with Fred Hoyle in the 1960’s.   The session included a talk by Fred Hoyle’s daughter Elizabeth Butler who gave some of her personal reminiscences.  This presentation also peered beyond Fred Hoyle’s relatively impoverished childhood to a more distant lineage that included one noted poet (Ben Preston) and members of the British aristocracy and intellectual elite.

The meeting closed with my 50-minute talk on “Convergence to Cosmic Biology”.   Here I traced the steps in my 40-year-long collaboration with Hoyle that had led us from studies of carbonaceous interstellar dust to the theory that life is a cosmic phenomenon.

The Hoyle-Wickramasinghe Model of Panspermia is now globally acknowledged as the most likely hypothesis of how life spread throughout our Solar System, Galaxy and even Universe.

Since Fred Hoyle’s death in 2001 new results from astronomy, geology and biology, including DNA sequence studies, have shown our theory to be amply vindicated.  A major scientific paradigm shift with far-reaching societal implications appears to loom large on the horizon.